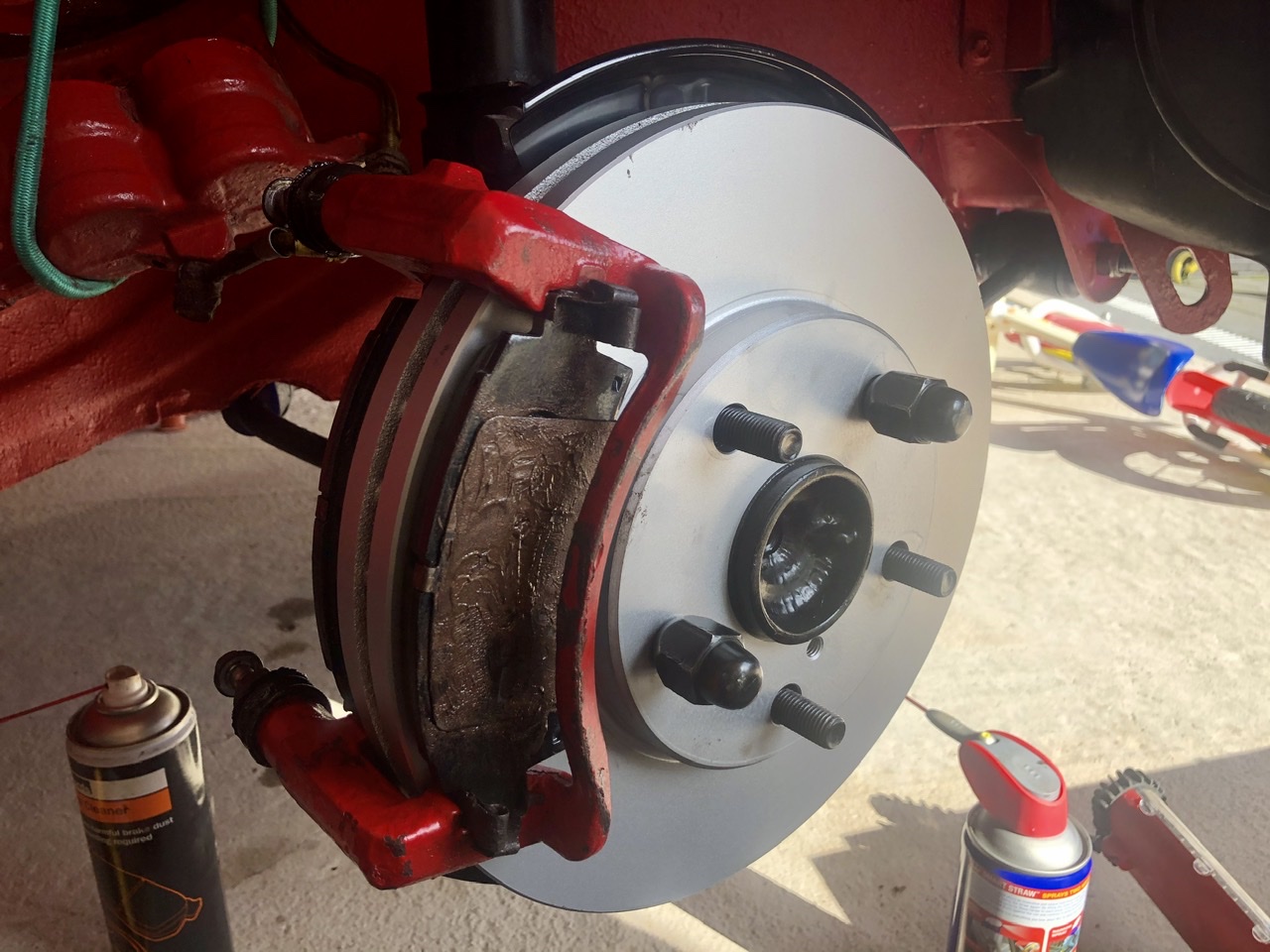 Driving the car from Lochgelly up to Aberdeen gave me plenty of time to listen out for any untoward noises. There was a LOT of noise. Rubbing, and metal on metal noises which worsened or got better depending on which way the wheels were pointed. Suspecting warped discs, I took Mister Two home gently, and parked him up in the garage while I ordered new discs and pads.

Another virtual stop off at MR2-Ben for the following Shopping below. The wheel nuts are required as a number of my existing wheel nuts split apart when the wheels were being torqued up! Not the first time I’ve had an issue with them, so that’s the last time I go for lightened aluminium racing nuts. The addition of brake pad clips and replacement carrier bolts came later as I dismantled and reassembled components.

Dismantling the drivers side calliper it was quickly apparent that the clips which the brake pads slide on were well past their shelf life – heavily rusted. The pads wouldn’t be sliding on these at all. The clip on the outside had shifted out of position and was contacting the disc, which would explain some of the noise. The positioning of the disc in the carrier wasn’t right, with barely any clearance between the disc and the carrier on the inside. Removing paint from the connecting surfaces got the alignment back into a good position.

This took a long time to get right! I must have built and rebuilt the drivers side around 10 times to ensure nothing was rubbing, and even when I got it right, I am going to go back and do it all again so that I can fit the new pad clips and slider pins (which I ordered after starting the passenger side)

The passenger side was the noisiest of the two, so I was expecting a worse situation here. Which was immediately the case! There was no clearance whatsoever between the disc and the inside of the carrier. So that metal on metal noise was definitely from here. The lower slider bolt was seized, which I wasn’t expecting from brakes that had just been put together. This appears to be mainly from a perished anti vibration rubber which the lower pins have. It looks like copper slip had also been used to lubricate the sliders which can perish rubber so I cleaned them up and replaced with some CERA TEC. The carrier bolts came off very easily, so either they weren’t torqued, or all the vibration had knocked them loose. All in, I’m very glad I had to have a look at the brakes!

I hate shearing bolts, especially when I am trying to torque them correctly. In this case though it appears that the carrier bolts were slightly took long (they split the metal on the inside). So another delay while I order up replacements, but when they arrive, fingers crossed there are no more issues and I can get everything back together to get a drive in the car!

Bigg Red to the rescue again. New slider bolts, Rubber boots, securing bolts and the little rubber bushes for the lower sliders. Receiving these in new condition like this made me understand that the rubber boots on my existing sliders are also fitted the wrong way round! The boots are meant to be pressed into the carrier (as per the MR2 repair manual), and not pressed onto the lipped edge on the slider bolt. So as per the pics below, I pressed the boots into the carrier, then greased up the sliders and inserted them until the rubber side of the boot popped into the recessed area.

I dismantled the drivers side (again!) to fit the new parts there, but found that I really needed to grind some more material off the calliper. Given it was 23:00 I figured that was too late to start grinding in the garage so will hopefully finish tomorrow!

And the brakes are finally rebuilt! They are now silent running and working perfectly.