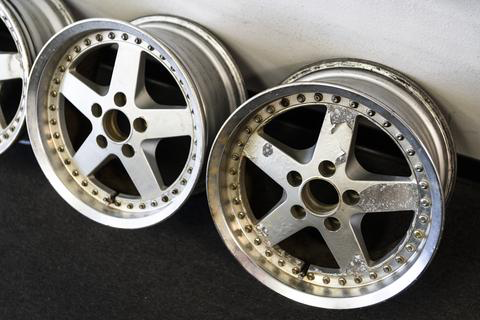 I really like the look of the original MR2 five spoke wheels, especially in black like I had on my previous MR2. But I feel like they disappear into the arches a bit so was on the lookout for some thing similar but different. I stumbled across a full set of Work Equip 05 on eBay which I really liked the styling of. They were in need of some TLC, but I secured them at an absolute bargain for, what I found after some research to be a rare and sought after wheel. Unfortunately I do not have the original eBay listing picture, but they were original looking (silver all over) with tarnished colour and plenty of kerbing and scuffs (image above is similar). New, or in good condition these wheels sell for £1500. My eBay Purchase price: £295! After a long search for somewhere capable of working on 3 piece split rims I had the wheels sent from the seller directly to the Wheel Repair Centre in Preston (who have since gone into administration unfortunately).

One other thing I would have to change would be the wheel nuts, which were looking a bit past it now and wouldn’t look great on the new wheels. So I found some Ultralite, gloss black racing nuts which were extremely light to go with the new extremely light wheels (a few years later I would realise that lighter isn’t necessarily better when they started snapping apart!).

I quickly got to work replacing my previous wheels with new!

When the wheels were posted, the included the centre caps, unfortunately they were either lost in transit, or lost during the refurb is the couldn’t be found. With these being a rare wheel they are very expensive to replace (discontinued from the manufacturer) so I started looking at alternatives. A few specs about the wheels:

Polished metal lips need to be maintained. I learnt this the hard way as my car at the time was stored on the street with no garage to hide it away from the elements. The car sat on the street during a bad winter with salt and dirt being sprayed all over them. So unfortunately after just a couple of months the wheels looked like below. I started manually restoring them.

Eventually I had a garage to store the wheels in, but the wheels still weren’t restoring back to their original shine despite a LOT of elbow grease. That crack which is pictured above appeared immediately after putting load on that particular wheel, that crack had also worsened over the years. So I took the decision to have them refurbed again. This time by Rimscarnated who’s portfolio includes some amazing work. They had no qualms with being able to fully repair and restore the wheels. I decided this time to avoid the polished rims to allow a better balance between looks and maintenance (this isn’t a show car), so we went for a coated lip.